“This was a long time coming” – first comment from public.

For a year, this site has spoken against resistance to expose a history of abuse by Connor Cochran and Conlan Press. It caused consternation among many fans who didn’t want to believe their eyes. Some would Hear No Evil, See No Evil, Speak No Evil about ten years of scam victim complaints. “We need more evidence!”

It was just as Cochran planned. Smart people set their judgement aside out of love for Peter Beagle. Peter was manipulated as a shield, while they were misled by a fog of excuses, deceptive charm, movie tour hype, and oily PR.

Cochran’s properties grew behind the false front.  From small publishing scams, he rose to seducing investors for millions with a sham corporation (Avicenna).  There were no limits to his calculated greed, or what he would do to hide it. It is sociopathic abuse (details below- “Gaslighting The Victims.”)

But independent victim reports kept coming, despite denial.  This site holds documents in confidence that could make you cry.  You can tell how important they are by how hard he tries to bury the expose.

Countless customers are complaining across the internet, with reports of being cheated and misled by a con artist.  Former employees won’t put Conlan Press on their resume, with abuse exposed by Cochran’s own blundering. (Whistleblowing by Michael Bolger was unknown until Cochran attacked him and exposed it himself.)

Now comes hard evidence of elder abuse for gain. Until now, it was only hinted by Cochran’s shady behavior, but we predicted this.

Peter Beagle has no communication with us. His report is independent. It ties many threads together, bringing major publicity that the fraud has needed for a long time.

Putting FRAUD in headlines is a major victory. Abuse can’t stand against consumer rights and fairness. The tide is turning and the expose is relentless. Remember our promise a year ago:

Despite Connor Cochran’s cockiness about courts… if you see this site live, he doesn’t have a thing to do about it. If he can’t get this site taken down, take it as a firm clue that Connor Cochran is lying. This site reveals the truth of the scandal he caused. We won’t be silent until fairness is won. We PROMISE.

Cochran broke his promises for 10 years. We deliver ours. The story is way bigger now and it won’t go away. The emperor’s clothes are gone. Cochran’s false front is “in tatters”, because Peter won’t be a shield any more.

All 48 pages are worth reading. Don’t skip it. It hits hard with a compelling story, clear timeline and convincing support. It’s sad and shameful to see the cheating Cochran did, but opens a better future for Peter and his work.

Beagle is earning love and support from true fans and the top of his profession. His story is spreading through prominent fellow authors like Neil Gaiman, Wendy Pini, and Charles De Lint. Their professional inside experience validates the story.

Hundreds of shares show that there’s nothing “frivolous” about this. Across a worldwide audience, Cochran is consistently being called out as a villain, abuser and fraud. One of countless scam victims confronts him:

What better evidence would I need to be convinced that you’re a crook than to have been personally cheated by you myself?

Peter’s report corroborates 1o years of previous complaints. Could there be any more powerful support? It independently confirms fraud.

Our expose was accurate against disbelief. So please pay careful attention to what we share from this point on.

We know worse than what’s been told so far. We’ve seen hurt beyond any you could suspect by hearing the Conlan Press excuses. Anyone who clings to Cochran’s sinking ship is in for a terrible trip. If you still keep a shred of sympathy, don’t – back away.

Get on the right side – believe the victims.

A small core of misled followers are still unsure about Cochran.  But even cult brainwashing victims can come to their senses. Others should know better and are shamefully complicit. If you hear anyone dispute Beagle, look for how they benefit.

There’s no conclusion except shame to see Cochran break up Beagle’s family. Beagle’s kids went months without seeing him face to face, and didn’t accompany him on the movie tour where abuse happened. They degrade themselves by associating with Cochran now. This is common in tabloid stories. When Hollywood money is involved, children aren’t above betraying elders.

Damage is deepened by others who couldn’t possibly be witness to abuse, but still help Cochran blow smoke with fluff quotes of inconsistent time and place.

Questionable ties and silence make an issue itself, involving sources like BoingBoing editor Cory Doctorow and the File 770 Sci Fi fan blog. These SFWA associates should know better than to deal with Cochran in his sordid partnership with disgraced ex-SFWA lawyer Charlie Petit.  Then there’s the abuse-enabling blogger who gets severe criticism from his own readers for violating ethics others won’t – by dishonestly “reporting” Cochran’s PR without question, until it continually fails and has to be “updated” with reversals. (Exhibit ‘A’ for what journalists don’t do).

All of that is harming the victims.

Some of these followers are troubled by cognitive dissonance.  They’re desperate for a villain besides Cochran to blame. That’s another fake distraction. Cochran’s first defense was spuriously attacking Peter for “undue influence” – with none to name, because he has to concoct excuses now.

For everyone else who was shocked to learn the truth, remember that even Peter was conned while dependent. Don’t beat yourself up for trusting him before.

This expose has consistently maintained that Connor Cochran is the center of the scandal.  His wrongdoing is separate from Peter Beagle.  Any questions about Peter “looking the other way” are answered with his lawsuit. He had everything to lose by risking his career for fairness.  That’s a sacrifice for principle.  Go Peter!

Direct support isn’t the only thing fans can do.  If you want to buy Peter’s work, buy from publishers he isn’t suing (like Tachyon) or buy used.

DO NOT BUY ANY EBOOKS or unauthorized goods.

DON’T buy t-shirts, prints, or any other goods benefiting Connor Cochran at Amazon or Conlan Press… if you even expect they’ll be produced when you pay. The sales will fund lawyers who fight Peter. Cochran will be desperate to fund the court fight he caused. Even if you don’t care who profits, you take the huge risk of going empty-handed when he loses a $52 million lawsuit and goes bankrupt.

NOW more than ever, demand refunds for undelivered goods.

Take no excuses. Keep pressure going even if ignored. Don’t relent or hold out hope after years of fake promises. Hold Cochran accountable to help yourself and Peter. Keep funding to it’s promised purpose and away from Peter’s opponents. Conlan Press has consistently refused refunds, while mountains of the money pays for self-serving litigation – until they’re put under fire of public outrage. 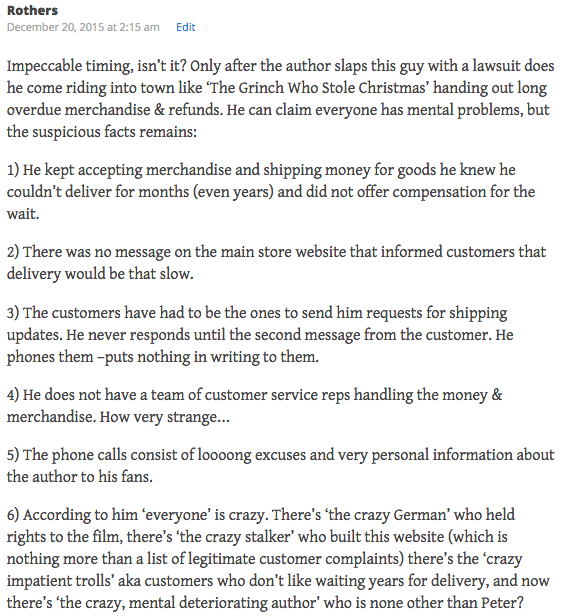 Until Beagle’s lawsuit, the cheating was all about greed. Now it’s desperation while Cochran struggles to fund court costs. Recent business dishonesty:

This exploits Peter’s name and work, to finance a fight against Peter. “The irony is as obvious as it is nauseating” – (personal friend of Peter).

Cochran is obsessively exploiting Peter’s voice and putting words in his mouth:

Misinformation was spread against Peter well in advance of his lawsuit, to prime the public to receive Cochran’s side.  The lawsuit documents Cochran’s manipulation of Peter’s own doctors, to fake evidence of health problems and “alcoholism”. That’s a cold sociopath at work. We previously reported the same tactics used against Cochran’s former employees.

Memory problems? What problems? The lawsuit gives evidence that Peter is in fine health, while claims of “forgetting key people and events” are spurious.  Case in point – Peter’s rememberance of Christopher Lee in mid-2015.

There are other victims not revealed yet.  If you hear Connor Cochran attack the character of anyone – it’s reasonable to assume that they have reports of abuse he’s afraid you’ll hear.

The manipulation is utterly professionally calculated, with decades of practice (he was once a TV news correspondent). If you hear charm and seduction from Cochran, be aware that this site holds documents of extreme verbal abuse he has done to bully and silence some victims. They aren’t ready to share yet. Help them.

Cochran played Peter’s agent, personal life manager and publisher all at once – with breathtaking conflict of interest.

“Publisher” is a term for companies that produce goods.  But for 10 years Conlan Press was just a signature factory with other publisher’s goods and one golden goose.  Meanwhile, Cochran’s real business was in court, suing to take other’s work and silence victims.  It made a house of cards.  Without Peter and his fans, this won’t last.

As more and more disgrace comes out, Cochran is desperately using every song and dance he can to spin the story.  Across his network, he’s doing a frenzy of hour-long phone calls to lather people up with oily PR.  In his tales of deceptive charm, he only had noble goals without gain for himself.  He was Peter’s angel, beset by coincidence after coincidence, and a vast conspiracy of evil, crazy enemies.

It’s loaded with manipulative guilt about how he tried to “make Peter a wealthy man“, while bashing Peter for abandoning his “chance”.

That’s a hollow ploy, and here’s why.

There wasn’t going to be a new Last Unicorn movie that involved Connor Cochran. He was chasing $125 million from Chinese investors and Hollywood players – as if they would seal a deal with Avicenna Development, a sham corporation suspended for tax delinquency, partnered with disgraced ex-lawyer Charlie Petit.  They knew. Movie producers aren’t easy prey like small, powerless fans.

He puts on a big show, but knows his future is grim.  As soon as this expose came out advising victims to report to authorities, Cochran ditched his California business location and fled the state.

Now, why does the focus of a fraud scandal and $52 million lawsuit move to Bellingham WA, 15 miles from the Canadian border?  Watch this point.