HomePeter Beagle was forced out of his home, but media is spreading the fraud story. Readers support him to #TakeBackTheUnicorn.

Peter Beagle recently lost his apartment as a result of abuse by his ex manager, Connor Cochran.

“I just found out that due to some influence his last agent had over his lease that Peter S. Beagle lost his home and is now in substandard housing…”

Cochran watched this happen while enriching himself with movie shows that pay Peter nothing. Where does Last Unicorn sale money go?  It pays Cochran’s lawyers to attack Peter, deny his rights and delay justice.  Meanwhile Peter is forced to have a fundraiser sale.

In the latest money grab for Cochran’s scam operation, The Last Unicorn movie played in one Florida theater on 3/27/16.  Fans were misled to ask if Peter would appear, without knowing about his lawsuit against those profiting from the show.  But the wrongdoing can’t be suppressed.  Media watchdogs have picked up the story and are carrying it where it needs to go – to the awareness of every fan.

@VICE sad indeed. would be interesting follow up to see how many fans were charged for products that they never received from this publisher

The elder abuse revealed by Peter’s lawsuit shows that fame and devotion is no guarantee of safety. Mickey Rooney and Harper Lee had similar stories about them.

apparently Peter S. Beagle, author of the Last Unicorn, has been defrauded by some dickhead named Connor Cochran https://t.co/0PATVmab5v

After Peter was abused, Cochran’s countersuit doubled down with a heinous attack at Peter’s girlfriend.  He pretends she’s a gold-digger in their 17 year relationship.  It’s a strategic smokescreen and punishment to emotionally defeat Peter, cut him off from support, and keep him under Cochran’s thumb. In Cochran’s bully mind, he’s yanking the choke chain on a disobedient dog. It’s the pattern the caused Peter’s lawsuit:

41 Defendant Cochran deliberately defamed Beagle, not just to the public or to business associates, but specifically to his children and to his close personal friends. He refused to stop including Beagle’s children and friends on his emails to Beagle, despite repeated requests to do so. On one such email, dated June 23, Cochran claimed that he didn’t “have any reason to make stuff up”, but this is clearly not true. As long as Beagle could be portrayed as an ill, incompetent, and alcoholic old man to his family and friends, Beagle would lack their support at a time when he was in critical need.

With all of the evidence of Cochran’s wrongdoing, nobody on any of the links has fallen for claims against the girlfriend. He’s struck out after years of lying and manipulation. Peter’s fight is winning. Here’s what readers really think. 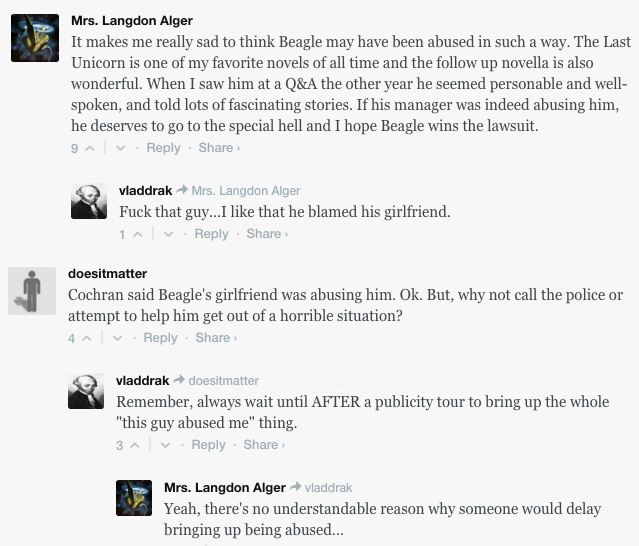 These readers nail it. 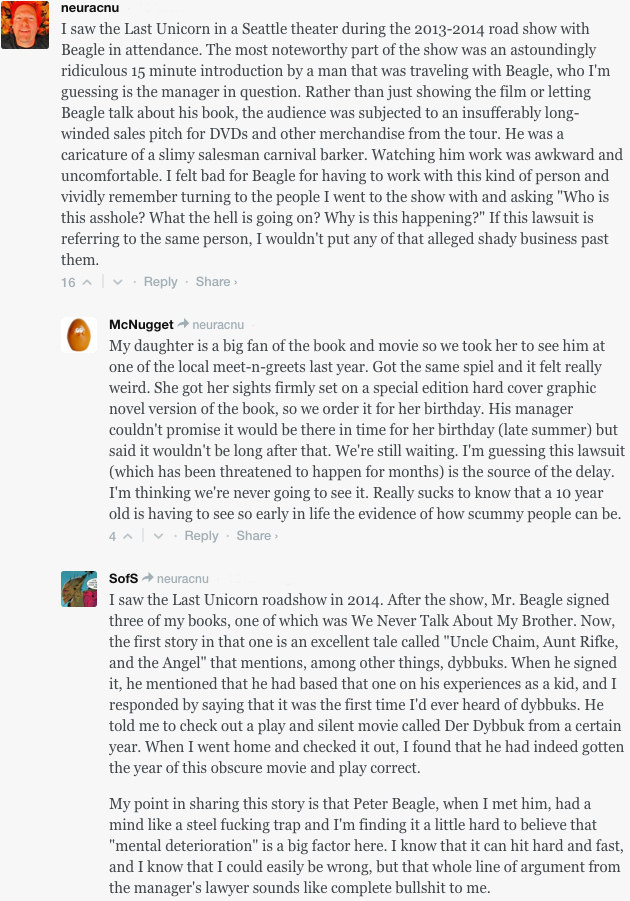 This one nails it, too.

“The other side of the story is very deceptive and all sourced from the manager. It’s known that the children were not part of the movie tour. Peter Beagle’s internet presence and facebook and twitter pages are owned by his manager, and there’s been a high amount of deletion of comments. Meanwhile all of the other complaints and lawsuits against the manager outweigh the excuses by a huge amount. It really is a story with a right side and a wrong side.

Copying a top post to the VICE piece on social media –

Beagle’s lawsuit was reinforced by another lawsuit at the same time by the Last Unicorn Movie Tour investors. His manager stole hundreds of thousands of dollars from them too, and he refused to tell them where it went. LA Superior Court case BC605386.

This story has a clear villain and a clear victim. Nobody has a bad word to say about Peter Beagle. His manager Connor Cochran has a decades long reputation for scams and fraud. Just google it.

Cochran claims Beagle is crazy, like many other targets he called crazy to get away with cheating them. But Beagle’s lawsuit gives medical exhibits that he’s in excellent health for his age. Cochran also is targeting Beagle’s life partner with legal attacks that claim she’s a gold digger. She’s been with Beagle for 17 years since before there was any gold. It’s an absurdly flimsy hit tactic/smokescreen. You can read the entire lawsuit at Beagle’s support site. http://supportpeterbeagle.com/wordpress2/

Please update this in a while because Cochran sure isn’t going to avoid paying huge damages. It takes a lot of attention for the audience who have been following all the shifting stories and lying about his scamming, but just read the piles of horror stories to get informed.”

Nice hashtag here – it deserves to be shared.

7 thoughts on “Peter Beagle was forced out of his home, but media is spreading the fraud story. Readers support him to #TakeBackTheUnicorn.”