HomeConnor Cochran’s motive for defrauding and attacking Peter Beagle, explained by a reader.

Why – The short answer is $$$, and the long answer is about covering up.  Cochran is desperate to deflect notice towards Peter’s supposed “health problems” – and away from his own history of predatory business scamming.

Avicenna was the sham corporation formed in 2008 by Cochran (with his disgraced ex lawyer friend.) It was supposedly made for Peter Beagle to share ownership 50/50. The other 50% was Cochran’s, with Conlan Press doing all the public business (and cheating so many fans). He promised to bring in multiple authors, but Beagle’s work remains the entire source of value – and Cochran refuses to account for the money. 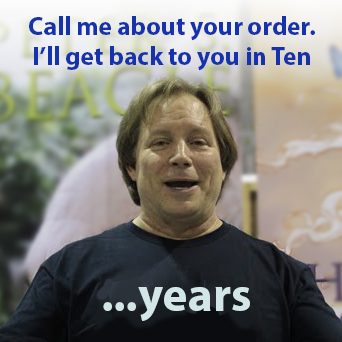 This reader lays it out point by point:

“Connor’s arguments about people preying on Peter – mostly directed at Peter’s girlfriend – all circle back to his assertion of Peter’s lawsuit being the only reason the movie deal didn’t work out (and Connor is also blaming Peter’s withdrawal from having anything to do with Conlan/Avicenna as the reason other book projects have not yet gone to press. Conlan’s projects are FOREVER “…about to go to press.”) There’s NO OTHER WAY to show harm. And every time Connor has to argue about Peter’s mental capacity, he rolls out the same story about Peter demanding Connor give him his mother’s ashes, which Connor says he already had – whereas MANY people can counter Connor’s claims by relating examples of having perfectly lucid and lengthy conversations with Peter.

And Connor’s only real argument for “helping” Peter – the argument that the negative influence of others that is causing Peter to make harmful or bad decisions – has to do with the lawsuit, and loss of the Japanese investor interest in the potential movie [1] – because what other benefit does Peter gain by associating with Conlan/Avicenna/Connor otherwise? Conlan is a Beagle signature factory that hasn’t published anything, and everything they DO sell is published by other companies; the film tour investors are suing Connor for not paying them or even accounting for the money; Connor lost another lawsuit for taking money from a teacher who wanted to be an author by promising to use the money to publish her books, and never did [2]; and there are thousands of fans and volunteers who never get things they paid for. [3]

And, if ANYTHING Connor claims about Peter’s health is true, then the days of endlessly signing books and doing movie roadshows should be over. So what value is there in enlisting the kids to gain conservatorship? Simple: Connor gains control over the part of Avicenna – and the rights to ALL of Peter’s work – that Peter can and is contesting [4]. And Connor can then dangle the unlikely prospect of millions of dollars pouring in from film investors in front of Peter’s heirs. That’s the only reason, because IF their claims about Peter were true, he should not continue working at even close to the pace Connor had been working him before.” 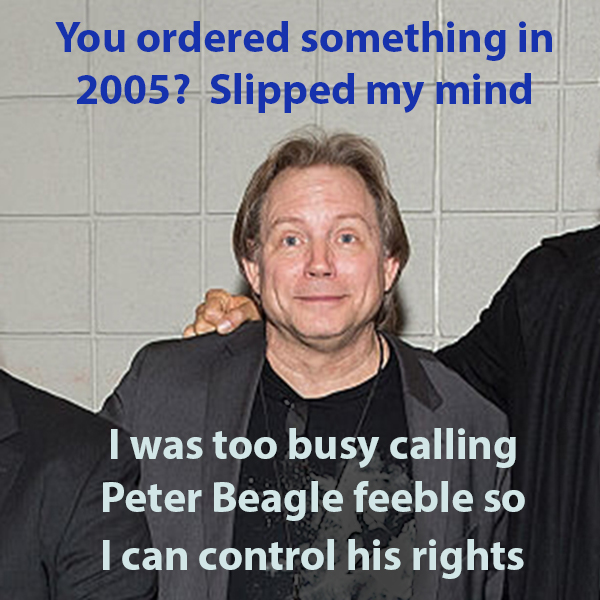 “If their claims are NOT true, then why try to make such a claim? Because otherwise, Peter IS in his right mind, and is justified in separating himself from a business that is both built entirely on his work and reputation, while being managed so poorly it is destroying both. If Peter prevails, Connor would have to make a full accounting to EVERYONE about all of the money: to the fans, about the sales of books that have not shipped, and of books that have not even been PRODUCED yet, in some cases, for more than a decade now;  to the tour volunteers, who were promised gifts that have never been sent; to investors in the tour, who were offered impossible returns, and yet have not received one penny in repayment or a single accounting of how the money was spent; and to Peter, whose work provides Connor’s SOLE INCOME, and which has allowed Connor to live in million-dollar homes while the creator of the work itself lived in apartments.” [5] 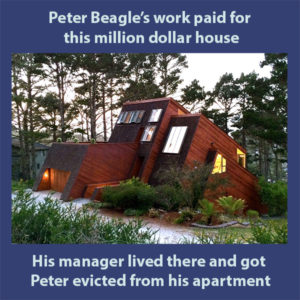 Connor’s full time occupation is running Conlan Press… the money Peter’s work generated has been his own sole income.

“If nothing else, if NOTHING else, Peter should be receiving money from the sales of the ebooks – which were launched en masse AFTER the lawsuit was filed – and the sales of the books that have happened since, plus a portion of the money from the screenings of the film – which continue without his involvement. But Connor/Conlan/Avicenna refuses to give any accounting, much less any payment [6], and Peter is having to rely on being paid by other editors and publishers who will work with him directly for new work [7]. It’s only speculation to assume that the argument would be that Conlan and/or Avicenna owns the rights, and thus owes no accounting or payout to Peter under whatever contractual terms Connor talked him into – but as Conlan Press and Avicenna are built IN THEIR ENTIRETY on the work of Peter Beagle, then any money came to those entities FROM the work of Peter Beagle, so it’s easy to see who benefits most from maintaining the status quo. And as Connor’s full time occupation is running Conlan Press, if he is withholding anything from Peter because those entities control the rights, then he’s only been able to do so because of the money Peter’s work generated, which has been his own sole income.

This whole conflict has NOTHING to do with Peter’s health – which Connor claims has been a problem for a LONG time but which somehow never stopped him from touring with Peter and taking him to conventions – and EVERYTHING to do with the shoddy way that Connor has run Conlan Press. Period.”

We spoke further with this reader. They reported that there are many people who have closely observed Cochran, who until recently steered clear of speaking because of retaliation against anyone who does. We’re happy to share those secrets here. And the public discourse about this scandal is now refocusing away from Peter’s health – Cochran’s primary diversion tactic – and back towards this fact:

“he is a terrible and unethical businessman who uses everyone around him.”

About his conduct towards Peter:

“…underhanded and despicable.  And then seeing things like that teacher who sued him – he never intended to use her money to publish her books – convinced me that it was all a massive house of cards.  And her win against him should be what the Sandbox people focus on, because he scammed then in the exact same way: offer grandiose returns on a debt that he does no accounting for. Because he never planned to pay a penny.”

The kids’ position is also clear from a comment Kalisa made on one of those other stories, about how Peter signing 5000 apology notes was a part of his contract. They have clearly bought into Connor’s savior angle, and don’t see the thing Peter was signing apology notes for was another one of Connor’s failed schemes.

Please keep doing what you’re doing.  Peter deserves far better than to have his life destroyed by someone like Connor Cochran.” 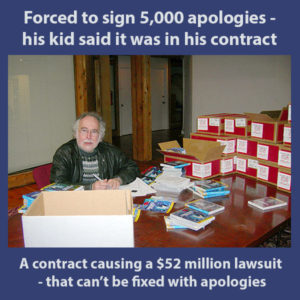 And the reader followed up:

“Where order fulfillment is concerned, there has long been a pattern of confusion and apparent forgetfulness on Connor’s part. Many, many people can testify to having had Connor promise something will be delivered, only to never have it happen. Perhaps this is indicative of a greater memory problem – in which case maybe someone claiming to have only his best interests at heart should legally file for conservatorship over him and his business dealings.”

“… and let’s say somehow Connor and Peter’s children’s effort to gain conservatorship over Peter is successful. How does that change ANYTHING with regards to how Conlan Press has been run? Connor has stated over and over again that it’s Peter’s health that has necessitated halting his participation in the film tour…so if Peter really is struggling with health and/or memory issues that will prevent him from being as involved in the sales operations as he had been, then what does the conservatorship do for ANYONE other than removing the right of a partner – Peter – to sue the other?  Conlan will continue selling things they can’t be bothered to deliver; they’ll still be sued by Sandbox for not repaying the tour investment; and Connor may think he can go do a new movie deal without Peter – but investors will be aware that he only got control of the rights by forcibly taking them away from a beloved creator.” 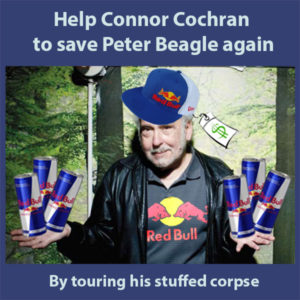 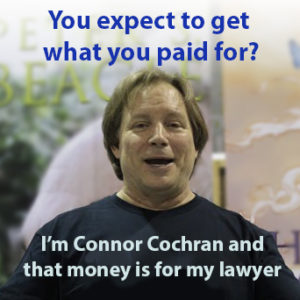 [1]  Reader misspoke about “Japanese” investors (meaning Chinese) for a new live-action movie.  See below screenshots of Cochran’s claims on 12/10/15. They are full of defamation against Peter and incredible distortions:

[2] Cochran was sued for taking $25,000 from an elderly teacher, and breaking their contract to publish her book.  Cochran’s defense is accurately described as gaming the system.  Rather than settling as a sane person would, Cochran dragged her through the mud with a frivolous countersuit.  She won an arbitration judgement (the only judgement in the case).  That should be that, but not for a frivolous litigant.  Cochran gamed the system by paying taxes to re-open a suspended corporation, only to get a new trial under corporate veil. It was a flimsy defense that ran up costs without chance for him to win, simply to make her cut losses.  It’s likely the only time his suspended corporation paid taxes was to block justice for victims.  It could not save him from losing another lawsuit in 2015 (search case 511166.)

[3] Here and here are volunteer reports.  Products sold and not delivered since 2005 include audiobook CD’s and ‘Two Hearts”, “Extra Deluxe” Last Unicorn books, the “Writing Sarek” book never to be produced without Peter, movie tour edition books, and more that can’t be accounted for. Even before taking over Peter’s career, Cochran was soliciting sales for his own book that appears never made.

[4] Peter’s lawsuit is seeking recission of contracts because they were made with fraud and to deprive him of his rights.

[6] Slight correction – Cochran’s ebook launch was October 2015, shortly before a lawsuit but when he knew it was coming. Peter had hired a fiduciary in September to manage his finances; Cochran got a crisis manager.  After lawsuit, sales promotion grew but Peter never received any money.

[7] Denied pay he is owed, Peter is relying on honest publishers such as Tachyon.

Connor: The King of Empty Promises

7 thoughts on “Connor Cochran’s motive for defrauding and attacking Peter Beagle, explained by a reader.”