On Peter’s birthday (April 20), The Last Unicorn facebook page was silent.  So were other social media false-fronts run by Connor Cochran and Conlan Press. Now their main concern is extracting money from fans to pay for legal battle against Peter.

Not all was silent with Peter.  For his birthday, his fans got the present.

Peter got a birthday post from Tachyon, an honest publisher who’s actively supporting Peter’s career. He did a reading in San Francisco and got dinner with fans (hi Ted!) And Balticon 50 announced Peter as their guest of honor.

That’s hardly the life of a man too feeble to manage without forcible control.

The world is a better place because Connor Cochran won’t be allowed to use these activities for his predation. It’s driving him to spread desperate, self-serving phone messages to plead that Peter NEEDS conservatorship… because otherwise Cochran’s movie deals will suffer. He’s all about the money.

Mystery of The Magical Disappearing Comments.

Comment on the Tucson screening announcement and watch it disappear. Alakazam!  On 4/27, there’s 54 comments shown but 76 listed (replies don’t count). That’s a lot of hidden comments. (You may need to log out to see filtering of ones you leave.)

Now let’s have a deeper look at the turmoil behind Cochran’s social media false-fronts, and the deception he’s doing to roll back awareness. 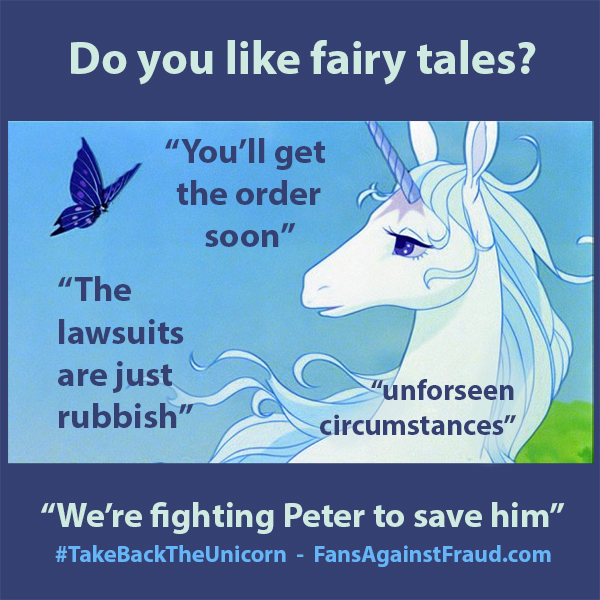 While Cochran exploits fans to keep buying what he sells, he doesn’t want you to know about the fight to #TakeBackTheUnicorn. He sees a storm of protest brewing and he’s battening down the hatches.

Massive deletion is happening to fan discussion about the fraud and lawsuits. We have screenshots of deleted posts with hundreds of comments. Let’s dig up what Cochran and his cronies want to bury. 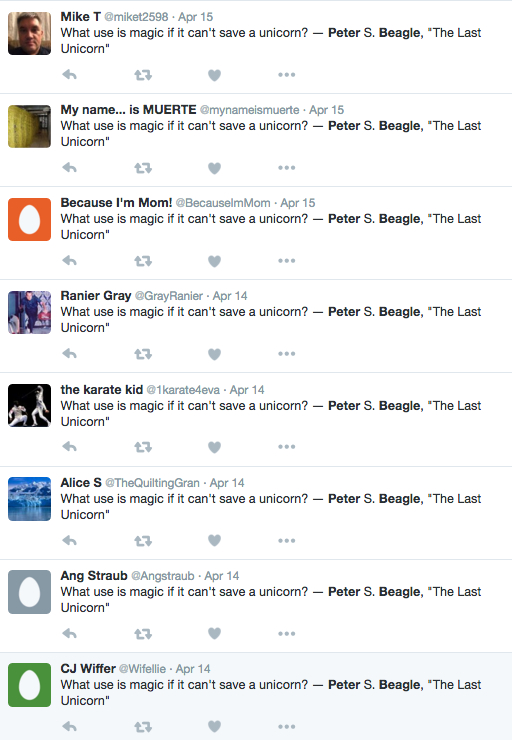 ATTACK AGAINST PETER by the Last Unicorn Facebook page! 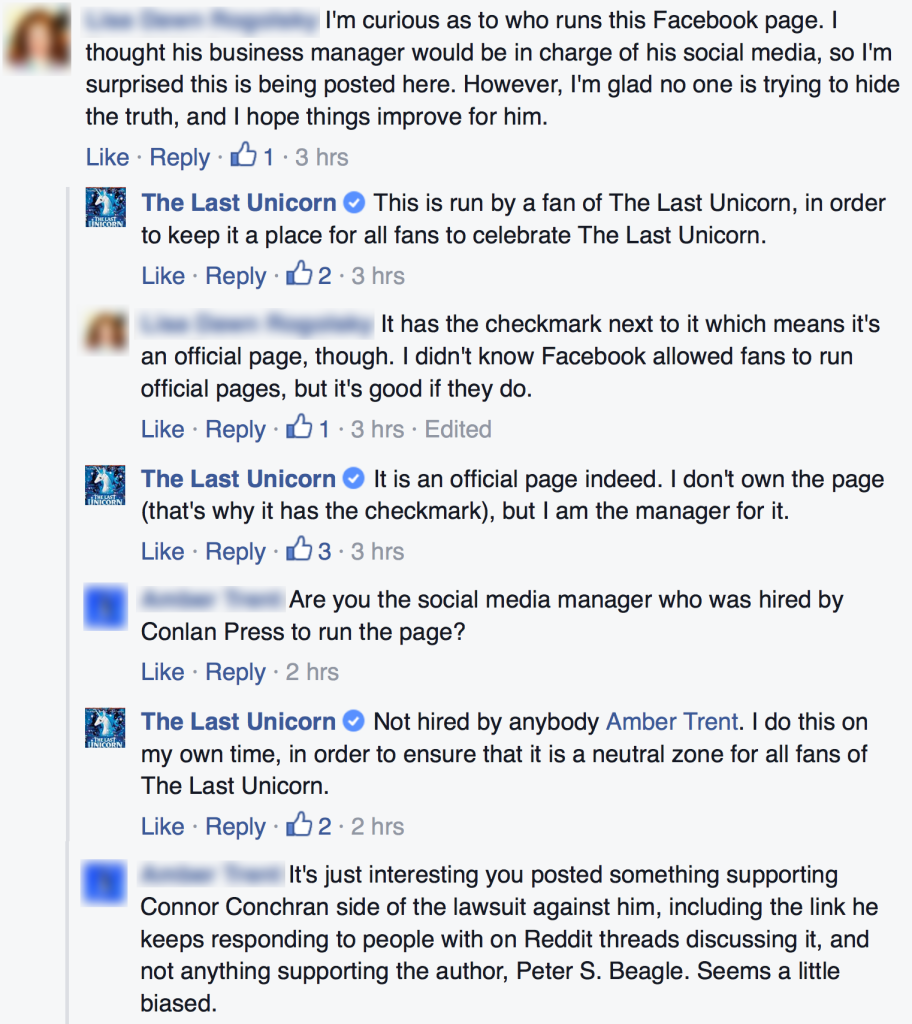 The selling must continue… but if you don’t get what you ordered, they have nothing to do with it. 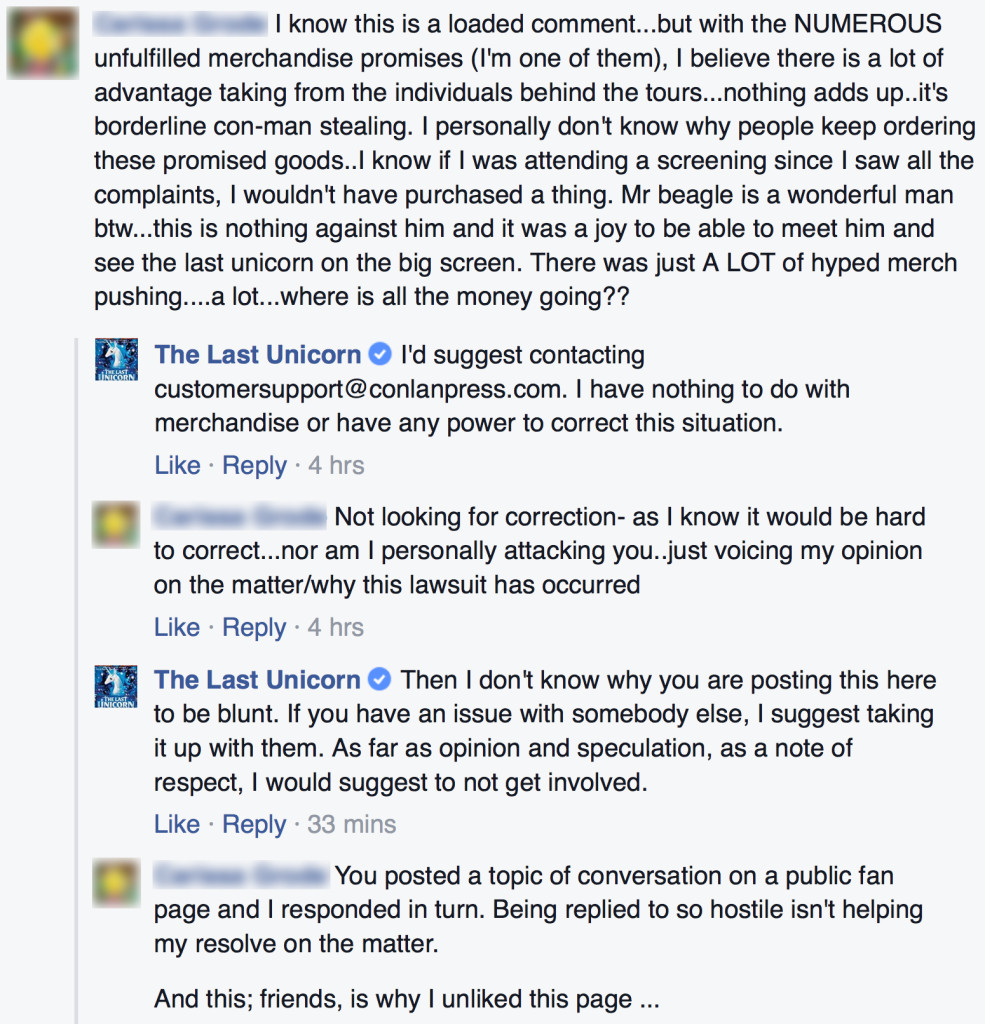 Cheated customers keep getting the runaround…

@ConlanPress hey, i sent you several mails about my order but got no reply

@ConlanPress Comment on the lawsuit: I (+ others) never received TLU DVDs from you. You're def a scam artist that I wasted $10+S&H on.

A message to the crisis manager:

When the Last Unicorn Facebook page says it’s run by “just a fan”, and refuses to name the owner, it implies being unaffiliated.

Do you get that little nagging feeling that you’re expected to say something that isn’t true?  Does your skin crawl a little about deflecting fans this way?  Admit it… doesn’t it feel a little weird and wrong, deep down inside?

Why ignore your conscience?

(EDIT: we’re told that previous crisis manager Reece Mack has stepped down. If that’s even true.  Reece: get distance from this, and best luck.)

Fans should expect much more of the smoke and mirrors to delay justice.  But the overwhelming evidence shows that Cochran is guilty of cheating many people besides Peter Beagle.  That’s why Peter will win.  Please help him, and share the story using these hashtags. #TakeBackTheUnicorn – #LastUnicorn