(Have you paid for works of Peter Beagle recently? Please contact his lawyer to help document sales he isn’t being paid for!)

Here’s more great news for Peter Beagle and his elder abuse lawsuit against his former manager, Connor Cochran. (See sidebar if you aren’t up to date with it).

At every opportunity, Cochran has tried to deflect the truth with a cover story.  Supposedly, Peter is senile and misled with “memory problems” and someone else is the cause of harm.  He set out to countersue the “someone else”.

Cochran has been attacking Peter’s lawyer personally.  On 7/26/16, the Court GRANTED her MOTION TO DISMISS those claims. The Order is below.  It’s another big victory on the path to justice.

Add this to failure of the attempt to get Peter ruled incompetent.  It proves to all that Peter is not incompetent or senile, and not being controlled by his attorney.  Claims that his attorney is somehow personally liable for simply representing Peter to obtain his rights against Cochran are not viable.

Notice that the Order has harsher words than just dismissal.  In the judge’s words, Cochran “appears to fundamentally misunderstand” the legal process he was misusing.  And there’s a motion to sanction Cochran for $25,378.99 for making Peter’s attorney oppose these claims. (UPDATE: The motion for fees is GRANTED and Cochran must pay.)

You can fool the fans some of the time.  But you can’t do it to the judge.  With his cover story failed, Cochran will face the music for what he has done.

This shows that anyone who can afford access to the courts can abuse the process (particularly against people who can’t afford it.) Peter has suffered from lack of finances to fight for his rights. Thankfully, it also shows that Peter has strong support from those who stand beside him.

Together, we’ll win justice.  But don’t rest!  History shows it will only happen after every roadblock is demolished.  Please keep support going all the way to the end.  See supportpeterbeagle.com, and share with hashtag #TakeBackTheUnicorn.

Here is the Order (and a PDF of the same.) 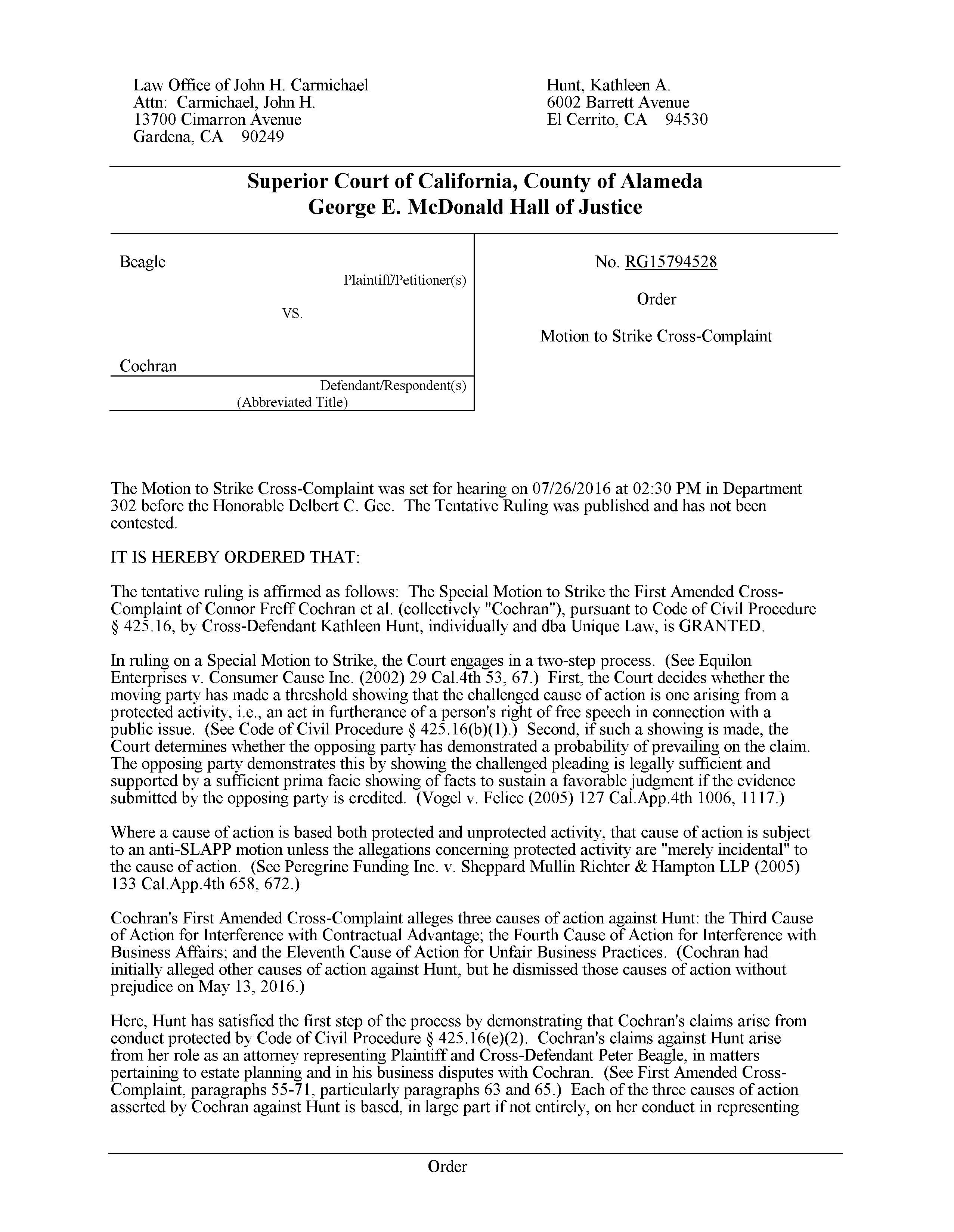 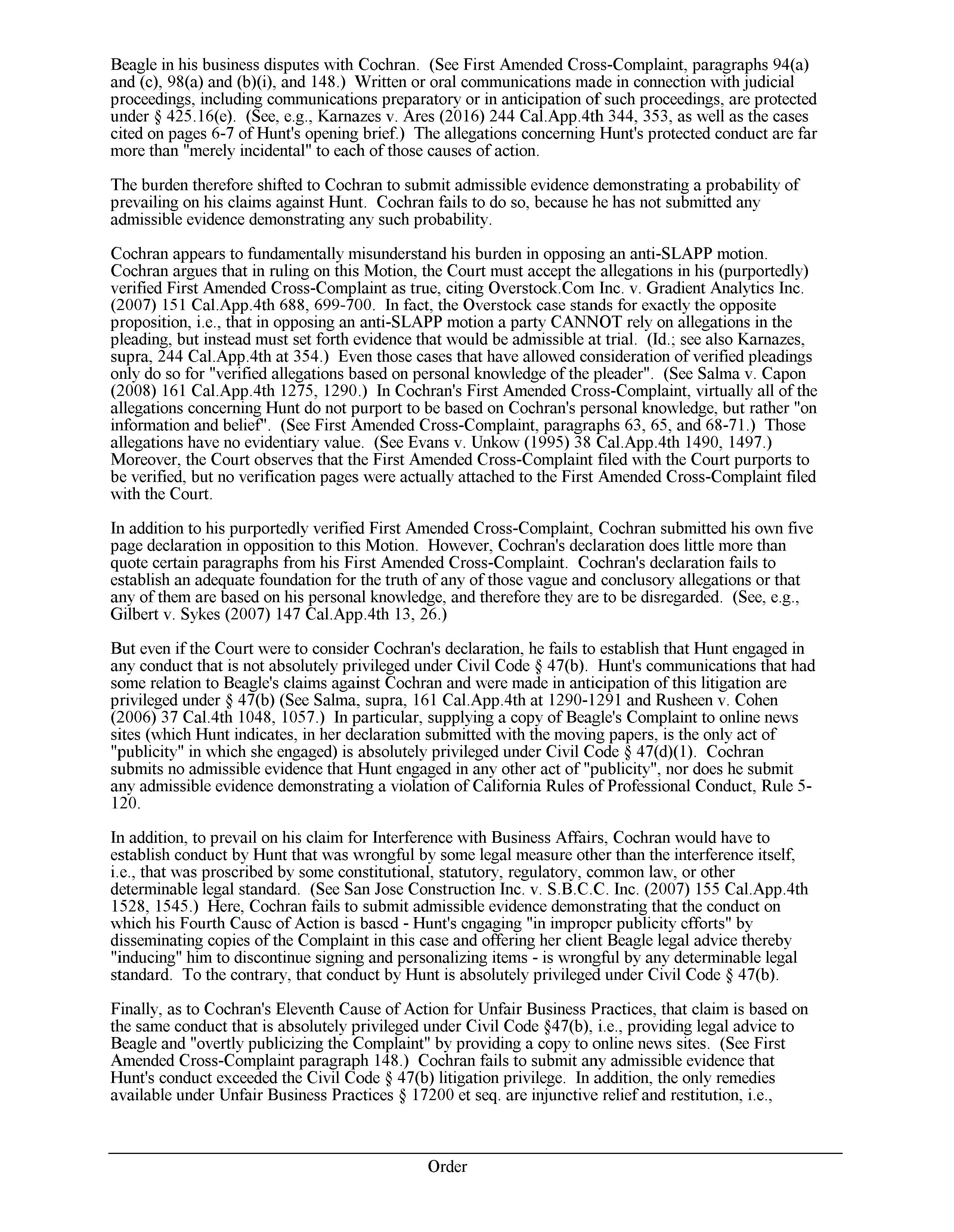 More news about Peter from his fans:

Also see this new blog coming ahead of the curve.  New World Slackers and their August book club pick, The Last Unicorn.

“UPDATE!! … Hey guys so just a couple days ago we posted our Book Club recommendation for the month of August – that being The Last Unicorn by Peter S Beagle. Now while we highly recommend that you read this book and the subsequent short story, we have come upon some distressing news … the author of this book Peter S. Beagle is in terrible legal battle with his manager Connor Cochran who has reportedly committed financial fraud, by cheating fans, stealing hundreds of thousands of dollars from movie investors along with Peter himself as well as committing physical elder abuse against Peter.”

3 thoughts on “The countersuit against Peter Beagle’s lawyer is dismissed.”