Peter Beagle supports the call to the report of the lost merchandise from Conlan Press and bad business practices by Connor Cochran. Take action! (More in sidebar.) Connor Cochran is being countersued in relation to this site – Do not believe any info about it sourced from him.

Check out  the new post on Peter’s support site with a legal filing for sanctions against Connor. It describes his dirty legal tactics against Peter, and his history of gaming the system. It led to many court orders against him, including:

Connor’s jail sentence was settled by 60 hours of community service and 3 years of probation. (That means he was on probation from 2014-2017 during The Last Unicorn Tour, while he hustled Peter around and made him sleep on couches.)  To avoid jail, he was also ordered to pay $11,562 for his ex-wife’s legal fees.

Pay attention to the costs made by this behavior.

Stretching out the legal process is Connor’s weapon. He runs up costs for others while leveraging cheap service for himself  by an unlicensed lawyer (Charles Petit, who lost his license for cheating a client). The more Connor delays, the more power he gains from mismatched resources.

That’s why the court is NOT equal access here. Anyone without a movie and free lawyer service is fighting on a tilted field. That’s how Connor preys.

You may have seen many of Connor’s legal cases covered on our site, but the list keeps growing. This is the first mention of his ex-wife’s complaint – and now the following two cases of frivolous litigation he did against his own family.

It’s in Connor’s lawsuit against his brother:

Connor lost both lawsuits against his brothers in 2014. (” Petition to invalidate trust amendment is denied ” – and case PR30086 in Weld County, CO.) It didn’t matter that the first one failed. He went ahead with the same claim, and lost twice. Validity didn’t matter to him. The point was to inflict costs and try to win by attrition.

You are reading correctly – Connor used a disgraced ex-lawyer and false claims about his own mother to bully his own family for money.

A year later, he used the same tactical claim of “alcoholism” and “undue influence” against Peter Beagle, despite medical evidence proving it was false. This time his target is alive, making it abuse by gaslighting.

The pattern says a lot about what Peter is going through now. It’s why a customer says: “Connor Cochran’s success with scams depended in very large part upon his ability to bully people into silence.”

The complaint from Connor’s ex-wife has a transcript from his sentencing for contempt of court. It describes his tactics (page 5):

“THE TELLING POINT FOR THIS COURT TO THE CONSIDER IS WHEN DECIDING THE PROPER SENTENCE BECAUSE WHAT IT REALLY POINTS TO IS KIND OF AN AGGRESSIVE STONEWALLING THAT HAS BEEN TAKING PLACE FOR A LONG, A LONG TIME THAT HAS COST MY CLIENT A SIGNIFICANT AMOUNT OF MONEY. “

It is clear that nothing less than comprehensive sanctions will curb this obstructionist and contemptuous behavior.

Defendants have exhibited this cavalier disregard for the authority of the Court over and over again.

Defendant’s failure to produce documents responsive to the Court’s Order, even on the issues raised by their own Cross-Claim, is a blatant attempt to obstruct Plaintiff’s ability to prosecute his meritorious claims or defend against the frivolous allegations raised by the Cross-Claim. Their history and pattern of discovery abuse, as discussed hereinabove, indicates that issue, evidence, and/or terminating sanctions are both justified and appropriate.

Intentionally stretching out the process while hitting back with frivolous claims is abuse itself.  Connor Cochran uses such scorched-earth tactics to bully the elderly, who are the most harmed by delayed justice. Please support Peter and all who speak out about this predator.

The owner of Rickert and Beagle Books posted an open letter about this: “In case you have any lingering doubt, Peter’s just fine, mentally and otherwise, and anyone who tells you differently should be treated as highly suspect.”

Until late 2015, she was in charge of Peter’s social media under Connor, with intentions to help Peter.  That arrangement is how Connor put his own words in Peter’s mouth to deny allegations of fraud when we blew the whistle in 2014.  At the time, we addressed her with an open letter about workers being cheated.  Her 2017 letter says “I was never paid at the market value of my work.” We thank her and Peter for the courage of speaking out now. As we said in 2014:

We wish you success in business, and hope for change with Peter’s management and fairness for his fans.

For anyone else still caught in the years of scams, it just gets more sad and ironic .

Let’s end with something good from The Real Peter Beagle on facebook. With a story collection on the way and two new novels, you can tell this fight is worth it. 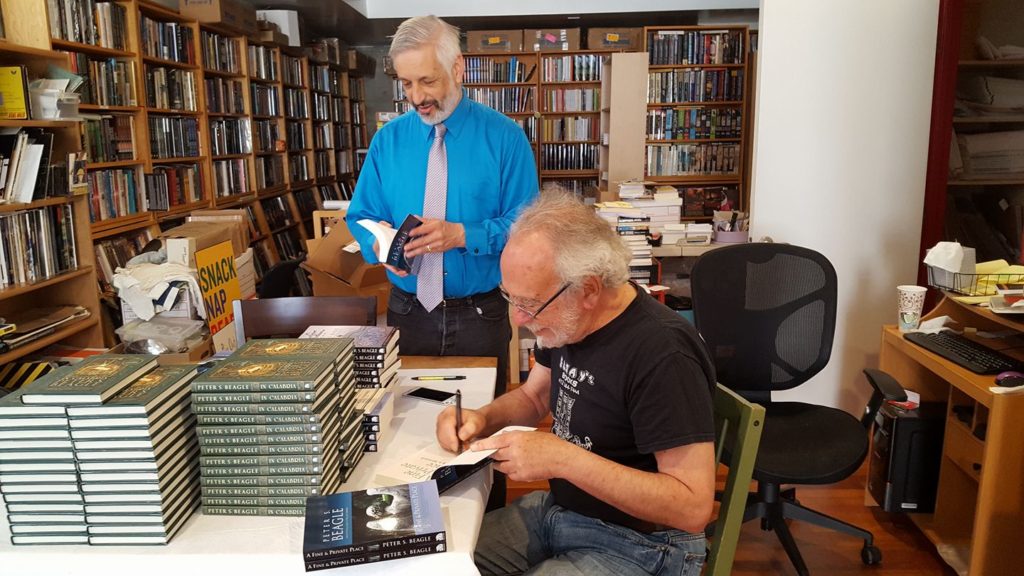